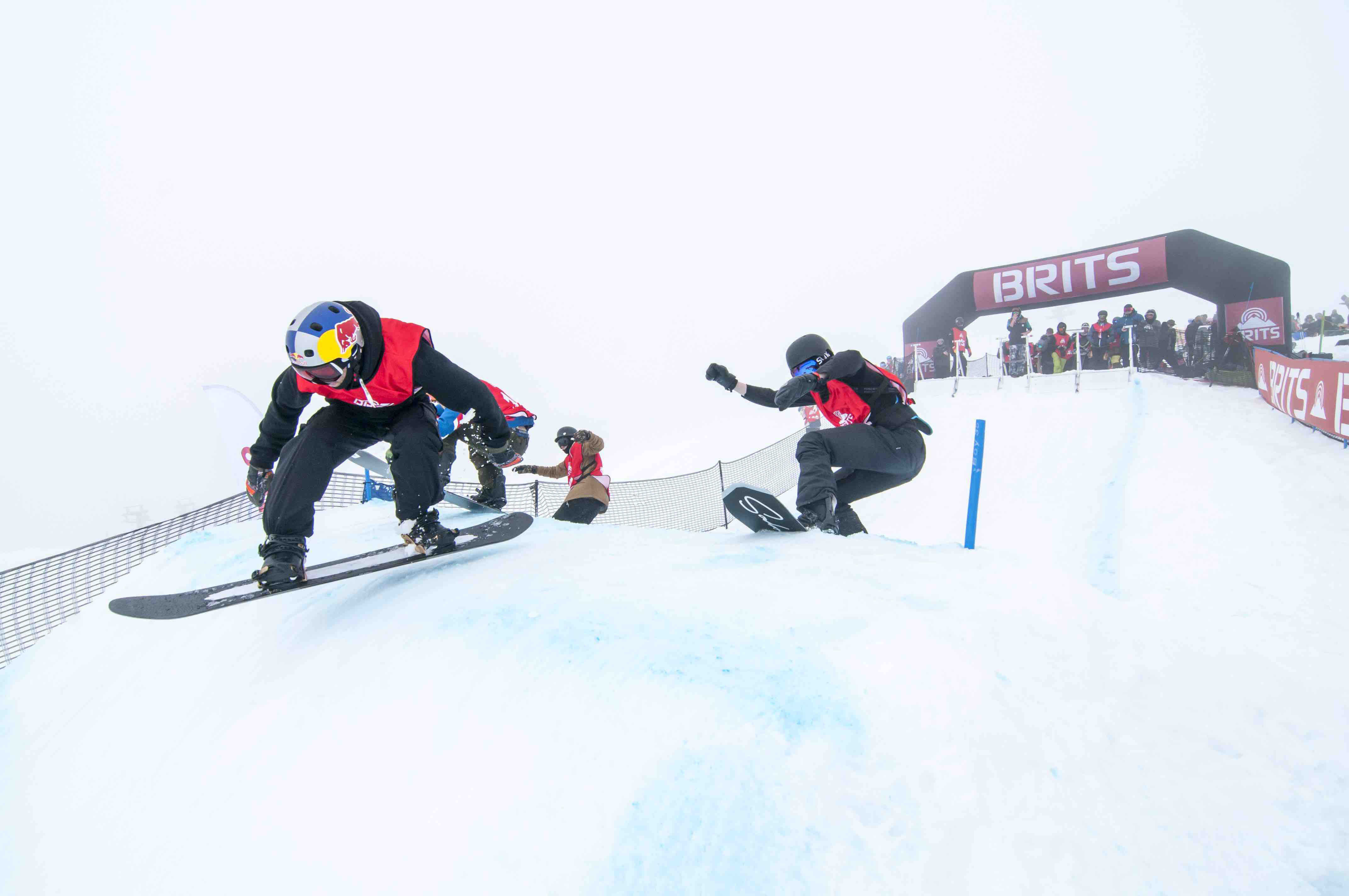 Day two of competition at the 2017 BRITS saw the tightest racing ever witnessed at a British Snowboard Championships as freestylers and racers went head to head proving that anything can happen on the boardercross course.

Whilst the sun once again had a tough time shining, one thing was as bright as ever - everyone loves going as fast as they can on their snowboard! Tiny groms, World Cup freestylers and seasoned cross racers all took to the wutangs, whoops and berms of the Crap Sogn Gion boardercross course, first setting their fastest times, then taking to the gates for the 4x4 racing..

In the open men’s category, a surprise name landed himself as top seed by some margin - quad corking freestyle rider Billy Morgan. His lightning time gave him first lane pick throughout the rounds, and he cruised through to the finals. Second seed went to up and coming racer Bradley Gaulter, who also found himself in the final with ease. Then it came to the biggest showdown seen in many years at the BRITS, with both riders neck and neck out of the gate. Clashes of edges were heard as the two pulled away from the other finalists, and they crossed the line in one almighty blur - so close, that no one knew the result as the racers, crowds and officials made their way down the hill. But technology prevailed, and high speed video showed that it was Morgan who crossed the line mere inches ahead of Gaulter, as he made a near perfect lunge for the line. A finish that will be remembered for a long time. WATCH IT HERE

When asked if he was considering a change of disciplines after the win, Morgan jested; “I’m pretty done with slopestyle, I’m there!” and said “I’m actually over the moon, and to be up there on the podium with my main man Matt McCormick” 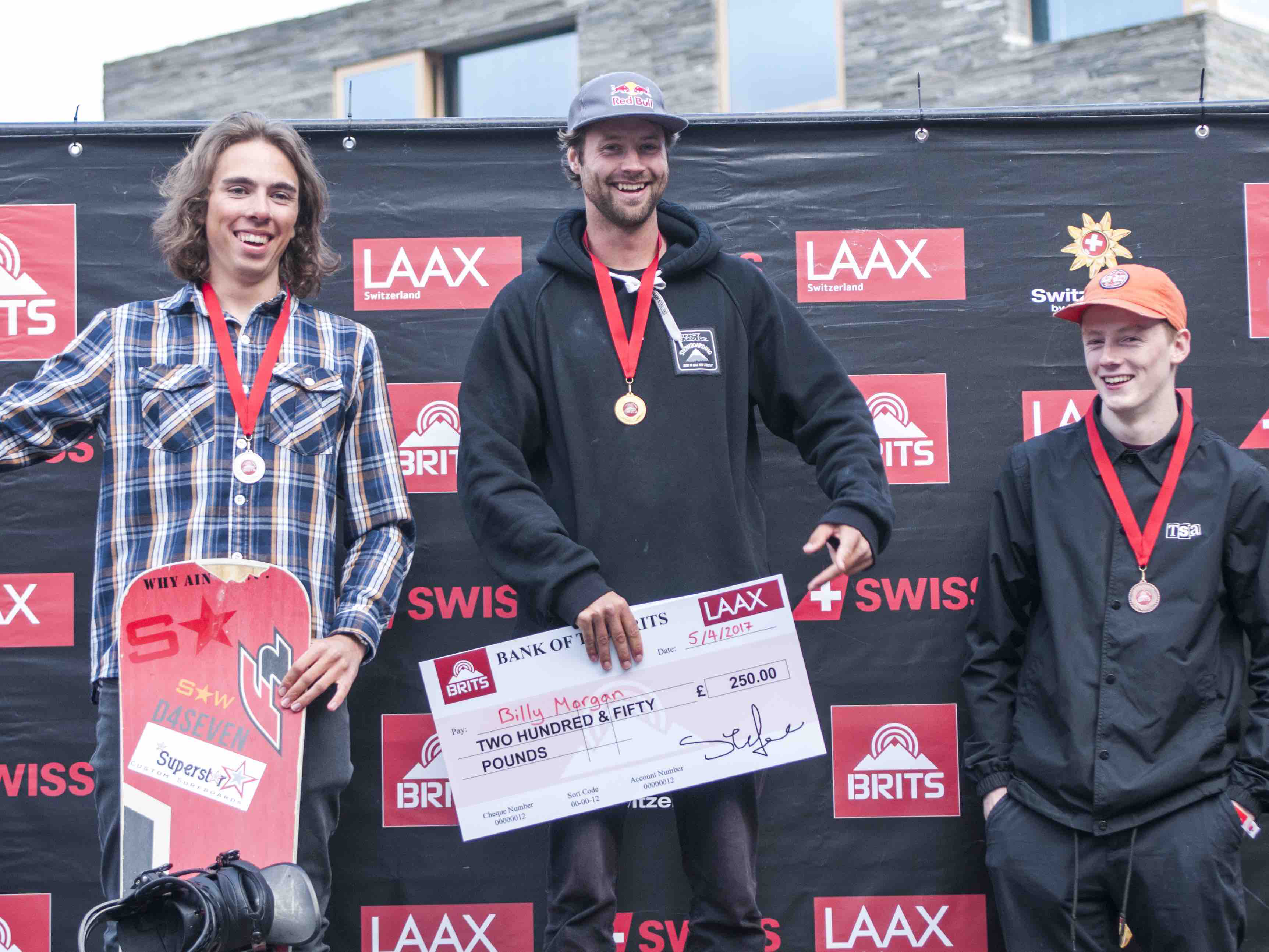 In the women’s race, a small field didn’t stop the big thrills as racers from the British Armed Forces team dominated. Aaby Aldridge stepped it up from her 2nd place in qualification to show what it takes to win in the Final. She saw off stiff competition from her Forces team mate Emily Bainbridge who took the Bronze medal, making it a 1-2 for the UKAFS Team and adding to their haul in the masters category where they took all three medals. In third it was a bittersweet bronze for Fiona Reed who set a blistering quali time some 6 seconds faster than the next, but a fall on the first berm meant she couldn’t convert the speed into a win today.

Aldridge commented; “it was absolutely incredible, I’m still quite in shock about it!” 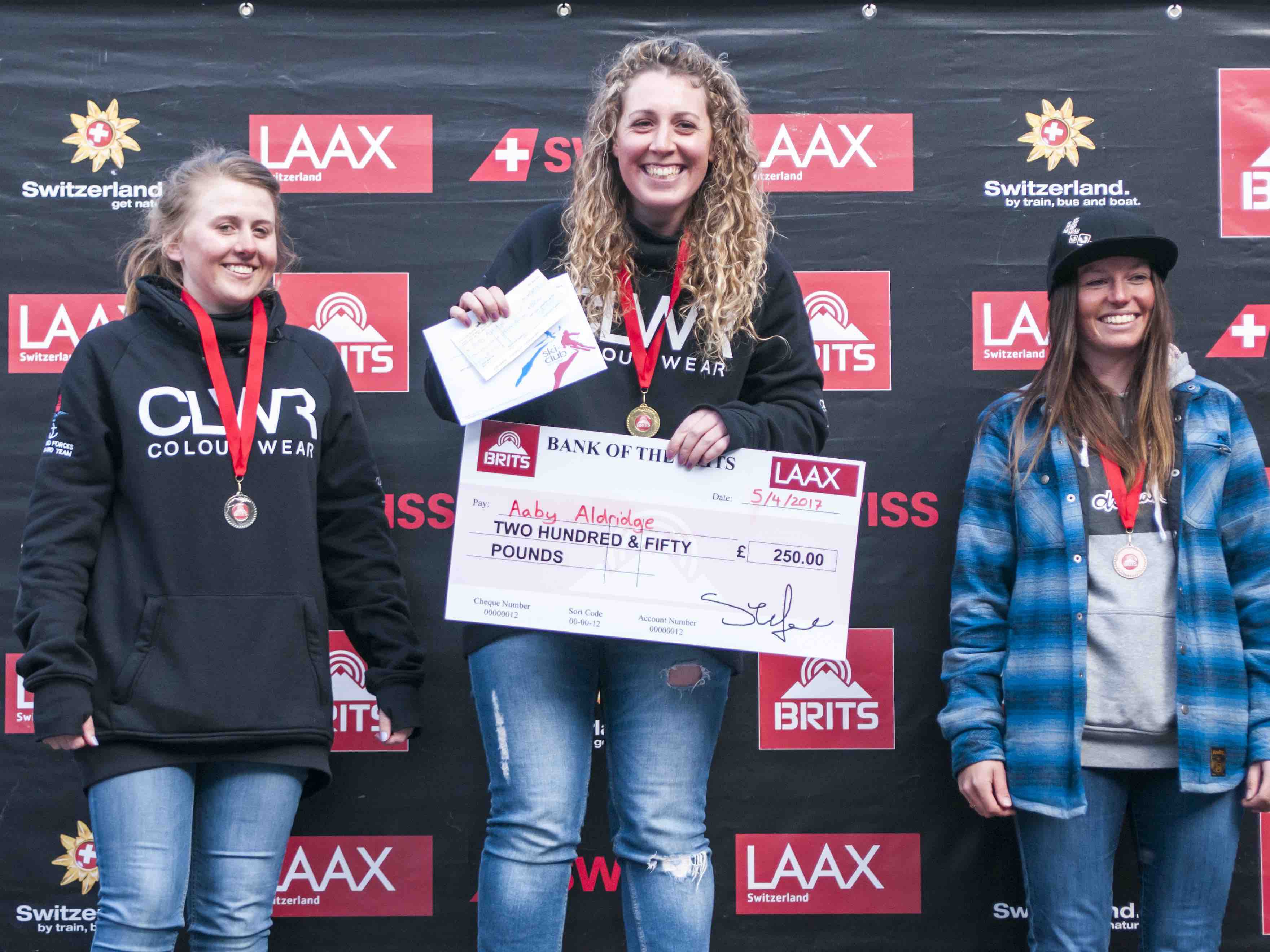 As always, it’s not just about the Overall titles on the BRITS cross track. With the Armed Forces locking out the women’s masters podium it was a trio of dads who locked out the men’s as David Blackwell took third behind Johno Verity and Ski Sunday’s Ed Leigh, who successfully defended the title he won last year, with a massive turn of speed - setting the second fastest time of the day.

In the under 12s category, 2 speed demons dominated with Mia Brookes and Charlie Lane taking the Golds. Their times in qualification required a double take, as the posted speeds that rivalled many of the adult competitors, and they sailed away in each of their races. Both athletes performance in all disciplines show that fundamental skills are all important whether on the racecourse or in the snow park.

The final race of the day was a first for BRITS competition, as 3 athletes from the British Parasnowport team joined the racing on the Laax cross course. Owen Pick, James Barnes-Miller and Darren Swift all entered the gates for the first adaptive snowboardcross race ever seen at these championships. As well as all competing to a high level in the open and masters competitions, the three stood atop the podium at prizegiving to a rapturous applause, as Pick took the first ever BRITS adaptive gold. 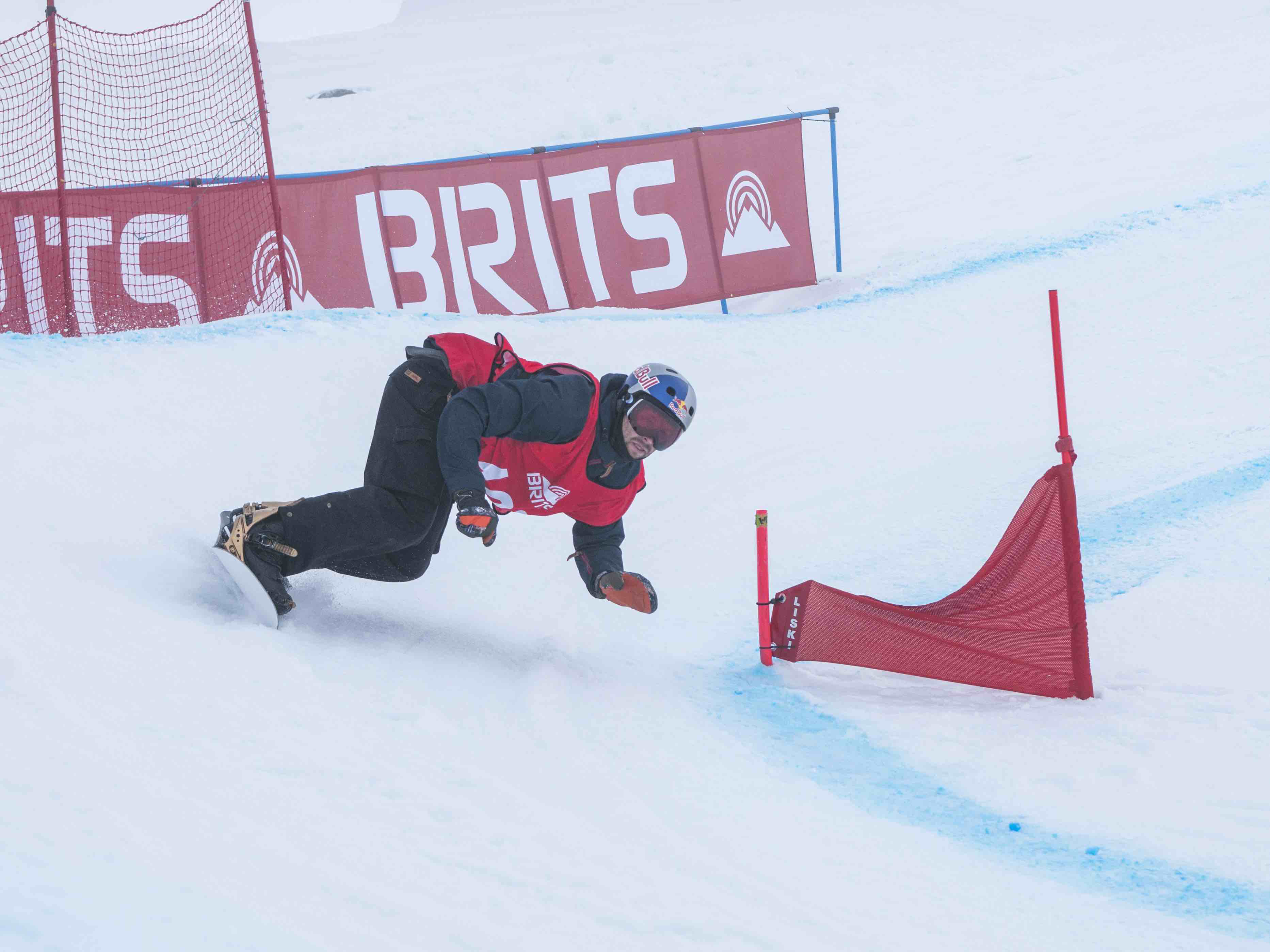 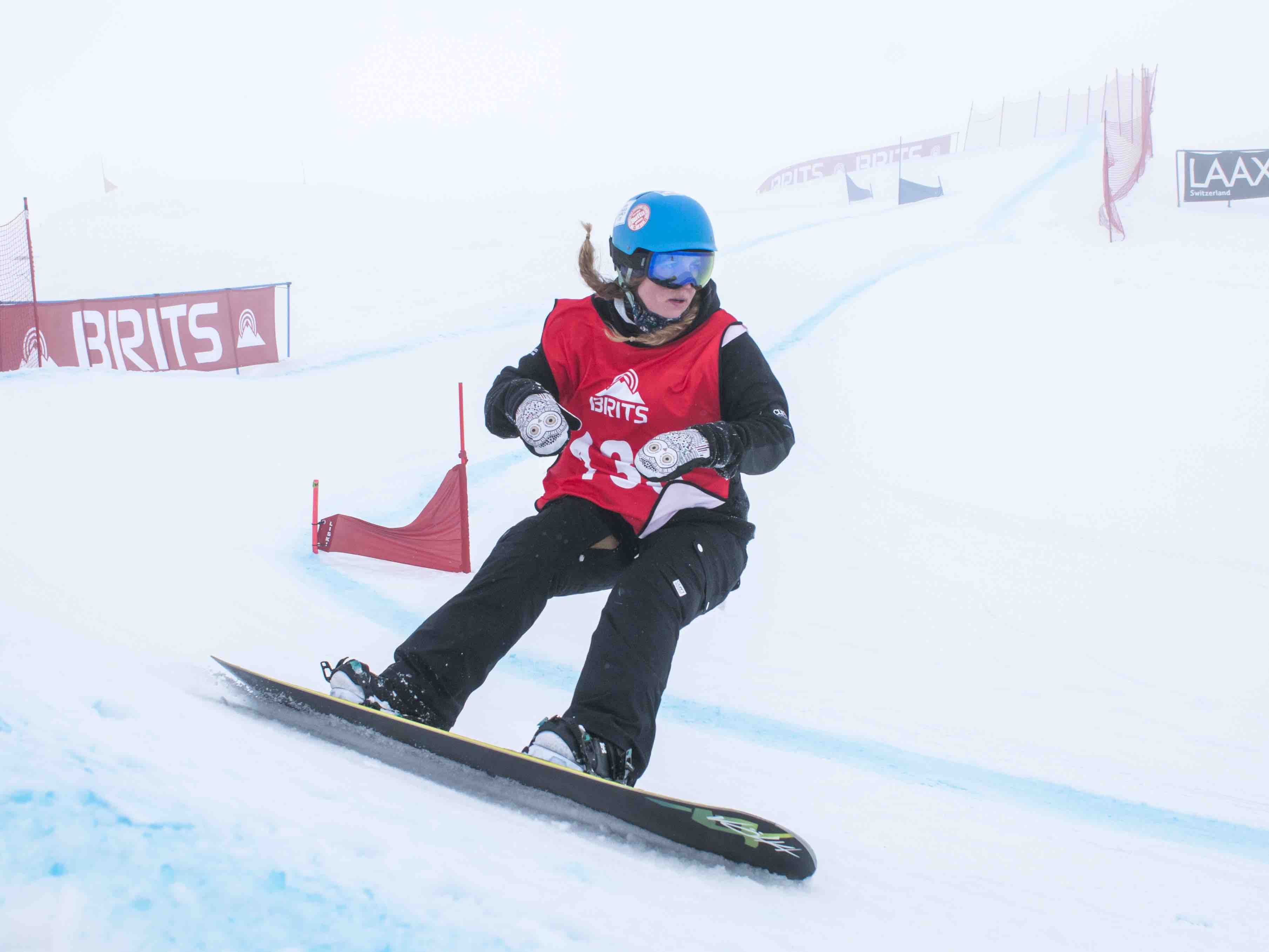