With the biggest show-on-snow almost upon us, what better time to update on the forthcoming British Snowboard & Freeski Championships - an event which has played a pivotal role in identifying the 17 freestyle athletes on Team GB, which heads to PyeongChang with its largest and strongest squad ever to compete at a Winter Olympics.

For more than 25 years, The BRITS has been nurturing freestyle talent, providing a professional National Championships circuit that prepares athletes for the world stage. Former British Champions turned world-beaters and ‘ones to watch’ include James Woods, Katie Ormerod, Jamie Nicholls, Katie Summerhayes and Billy Morgan, to name a few.

The BRITS 2018 (1-8 April 2018) will feature Slopestyle, Cross, Halfpipe and the new Olympic discipline of Big Air, which is once more presented by Picture Organic Clothing, who also see to it that event crew are kitted out in the latest and ethically-sourced threads.

Adding to the prize fund and working toward the collective goal of developing our promising young athletes, Delancey continues its significant support of UK snowsports, stating “We are delighted to bring back the ‘Ritblat Endeavour Awards’ for the second year running with a £3000 prize pot at The BRITS in 2018. We wish all competitors the best of luck!” - Jamie Ritblat, Founder and CEO at Delancey. 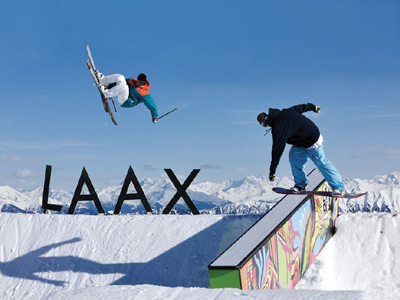 Finally, and without doubt, the single most important factor in the success of The BRITS over the past decade, is our host resort of LAAX, Switzerland. Put simply, LAAX is to freestyle, what Alaska is to backcountry, the very best environment to push snowsporting excellence. And it could never be argued that LAAX is not at the forefront of redefining the ‘lifestyle’ elements, which this year saw it commission an intergalactic redesign of the enormous and iconic lift station at Crap Sogn Gion 2290m, newly fitted-out with lodging that overlooks the entire freestyle arena. Check out project Galaaxy (https://www.laax.com/en/ski-resort/galaaxy).

So, if you’re looking for an incredible week away, riding the best freestyle resort in the world, rubbing shoulders with GB superstars and tearing it up at Apres, join us at The BRITS 2018. Head over to www.the-brits.com for accommodation and lift pass packages, flights and transfer information.